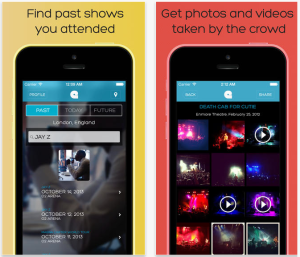 The bass drop, the drum beat and the roaring applaud and cheers of the crowd, urging the band back on stage for just one, maybe two more songs: those are the fleeting moments of a concert.

Those moments are what Toronto-based Encore is hoping to save for fans and concert lovers all across the world. The new app will act as a storage bank containing photos, videos, set lists, past and future shows and other sharable content, as well as the convenience and accessibility to purchase tickets and invites friends.

According to Encore’s Summer 2013 Survey of concertgoers between the ages of 18 and 30, 72% will take pictures, 49% will post it to Facebook, 41% will film videos, and 35% will tweet about it. Concerts are spectacles that fans will wait months and years for, and there is little doubt that it is worth remembering.

“We know everyone needs a good concert app,” Nicholas Klimchuk, co-founder at Encore told Techvibes. “We know what a good concert app entails. We don’t think people have designed it well. What makes Encore different from other concert apps is that we don’t just focus on upcoming shows—we focus on the past.”

“Users add every concert that they’ve been to and we suck in all the photos and videos, so you have a time capsule of the experience,” he continued. “And then it’s really cool to see a profile of every concert you’ve been to.”

Nostalgia is an important element of being human. The ability to recall the past and feel the warmth of a memory is something unique to us. But people evolve too and habits change. There was a time when concertgoers would keep their ticket stubs and place them with their collection after the show. They would keep it all in a box, an album or make a collage, frame it and hang it on the wall—some still do that, but most have transitioned into the digital age… and Encore is embracing them.

Yes, gone are the days of raised lighters, sign of the horns and peace signs, instead people are holding up recording mobile devices during the performance. Although the percentage shows that the majority is behaving this way, the act itself is still a little irritating to other attendees.

“It is kind of annoying that you have an iPad in my face and I can’t see the artist,” said Klimchuk. “There are ways to do it where people get used to it or it’s less annoying. But I think it makes a great beginning line for Encore, because people click through things they hate and people hate phones at concerts. Even if you don’t like the product, this will get people to click through.”

Encore puts the photo taking pressure on someone else. We have all tried getting the perfect shot through the crowd and even if we are competent iPhone photographers, the result may be a little disappointing. Sure, we put a higher value on the photos we take, and Encore is not trying eliminating that, what it is doing is sourcing the crowd and collecting the images and videos from the audience as a whole, allowing you just to enjoy the show in the moment, and the pictures after, should you choose.

We continue to anticipate concerts and reminisce about them long after it’s over. It’s not just about the music, the venue or the artist, but the memories we share with the people we went with. If you live in a big city, odds are there is a concert you would like to attend every other day; this leaves a lot of possibilities. Whether you end up going or not, Encore knows that we all need a moment now and then to recollect our thoughts, think about the good times and prepare ourselves for the next one—whether it is the opener, the headliner or the encore.