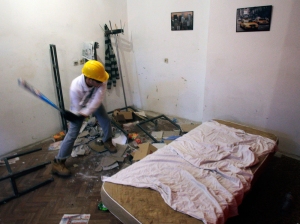 Why the ‘rage room’ is a therapeutic blessing

By Elliot Chan, Opinions Editor
Formerly published in the Other Press. September 16, 2015

We live in a society where we have to walk in line, talk politely, and eat with our mouths closed. We put so much pressure on ourselves to stay civilized that often we forget that we are animals. The way we bottle up our rage, stress, and frustration is one of the reasons why we have such an internalized, yet explosive, brand of suffering. When we erupt we do it in the most self-destructive ways: we burn bridges, sabotage ourselves, and mostly likely hurt our loved ones. Talking only does so much, writing in our journals only does so much, and even drugs and alcohol can only mute the pain temporarily. What we need is a safe environment to let it all out.

The rage room is the latest trendy stress-relief activity and I think it’s about time. Toronto has its very own, and I think Vancouver should venture into that market as well. Basically, the rage room is a confined space where you, the paid participant, can release your anger on inanimate objects. The same way dogs love to chew and cats love to scratch, humans have an innate desire to see things break and go boom.

Why not go to yoga, relax in a hot tub, or get a nice massage? If you like trendy, why not go lie down in a float spa? Why not go exercise for an hour or two to get the sweat out? While those activities will relieve stress, it offers a solution from one side of the spectrum. Relaxation has a certain flavour and destruction has a different one. It’s like wanting a White Castle burger and settling for a hotdog from Hot Dog Heaven.

Let’s say your favourite hockey team lost and you feel pissed. You don’t want to go do yoga. You want to smash this lamp here. Let’s say you found out that your ex-girlfriend is dating a richer, nicer, better-looking guy, you don’t want to read a nice book in the bathtub, you want to smash this lamp here. Of course we—controlled, well-mannered humans—never actually follow through with our destructive thoughts, but the fact that many of us have them makes me believe that we need a place to release it.

While a rage room is a fairly new concept, and may only be advertised as a fun thing to do on a Tuesday afternoon, I believe that there should be a rage space for every coffee shop. Just a place where we can walk into, bring something we want to destroy, and leave with the satisfaction that we can still make an impact in this world. We can still alter the outcome of a physical entity, without hurting another human being, of course.

Not everything in life will go your way. Sometimes the Canucks will lose. Sometimes your boss will not acknowledge your efforts. Sometimes your partner will belittle you at a party. Sometimes your life will seem like it’s spinning out of your control. That’s because we are forced to place meaningless objects on pedestals. We worship objects. We shouldn’t. Smash it. Smash it before you find yourself downtown smashing the window of The Bay or flipping over a cop car.