How a poignant album made me smile

Giving music recommendations is tricky. You’re selling someone on an experience, but it’s a challenge expressing how a song or an album resonates with you personally. So often when sharing music, all we can do is offer names of songs or artists, but fail to share what matters most: the place the listening experience took you emotionally. This is my attempt at taking you there.

Here’s an unverified stat: 80% of the music I listen to is from the same library I listened to 10 years ago. It’s harder to make it onto my rotation than it is to get airplay on the radio. Music used to be a bigger part of my life, but now, it’s simply the backdrop to my working hours. However, every now and then a song will come on and I would have to stop what I’m doing to listen — actually, listen — to it. Those little moments in a person’s life are special, and I’m glad, even in the hurly-burly, I can still have those. 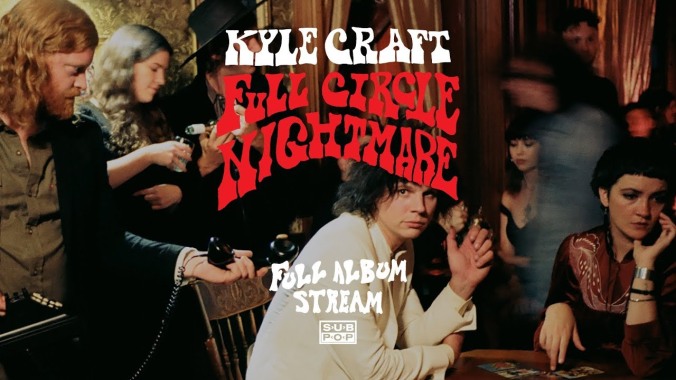 Listen to the album.

In the same year that Eminem, Kanye West, and Arctic Monkeys dropped new albums, it’s, in fact, a newcomer into my musical lexicon that shook me. And that’s Kyle Craft’s Full Circle Nightmare, which came out in February 2018.

Said to be inspired by Bob Dylan, Craft’s lyrics unfold a complex story of pleasure and desperation: two apt descriptors for myself lol

Before we go further, I’d like to thanks my unpaid Spotify subscription for this discovery. This alone makes me want to subscribe for $10/month, but as a marketer, I feel I need to support the platform’s advertising business model.

Okay, what is it that I like about Full Circle Nightmare?

On The Consequences of Saving Time

The song that introduced me to Kyle Craft was actually from his debut album: Dolls of Highland. The song: Lady of the Ark.

Note: I recommend listening to the music embedded below before reading on 🙂

Craft’s abrasive sound woke me. The lyrics telling a tragic tale of a relationship and the aftermath. The heavy guitar strumming in the background, making me shake my head to all the repulsive things I’ve done to get what I want… to only have the luster fade soon after.

Lady of the ark I think you were the start

I found him at the party feeling through her clothes

And he could look you straight in the mouth

But all that time he’d take it

Even though he didn’t watch the words come out

Oh why, why did you leave me

Craft singing in an almost scream “We’ll try… TRY…” makes me ache. We all try so valiantly to get and then to keep. All the while, we ponder how to apply sin to the effort, and debate whether the time we saved in the short term will end up being spent in the long-term, questioning what we’ve done.

This song got me hooked and I quickly went through Craft’s whole discography without looking back.

On Making a Living

Full Circle Nightmare and Kyle Craft found me at a particular time in my life. I felt as though I have finally reached adulthood. An adulthood that 15 years ago, I thought I’d never find: I’m heading home to my wife for a night in and planning on rising early to head to work tomorrow. The days where I could give up on things simply because they were hard is over. I’m responsible now.

Heartbreak Junky, to me, is a song about self-destruction. Thinking you’re undeserving. Feeling like an imposter. In that state, it’s easy to implode upon yourself. Throw up your arms and come clean. I AM not good enough. This can happen in a career, a relationship, and most certainly a dream. You say, “I’m not good enough,” and then you wake up.

You were a charmer, I was a heartbreak junky

You were a diamond, I was the heap of fool’s gold

You were the jet plane, I was a parachute failing

I was the cheap ad, when you were the centerfold

I’ve worked more per hour per week this year than any other in my entire life. I say this with pride and dismay. At times I felt like giving up. All of it. Everything.

All that work and this is all I have to show for it?

Some people have jobs, but I have callings. How I make a living is so much a part of me, it becomes my identity. It is my life. Over the years, I accepted that there are two types of people in the world, those who work to live (the weekend warriors) and those who live to work (where what they do goes beyond a paycheck). I categorize myself in the latter.

This year would have been hard — much harder — if I didn’t have Sharon, my wife beside me. I owe all my achievements (the tiny upward trend) over the past 4 years to her. She had become the foundation. Even if the sky was falling, I knew I had something solid to stand on while I carry the world on my shoulder.

I’m a worker. I can wind myself up and go, but Sharon is the one that sets me in the right direction. Divorced from my old job was traumatic and frustrating. The comfortable sheet was pulled from me. Exposed, it would have been natural for me to fall in despair. I tended to. I didn’t for one reason: having someone reminding me that I’m not the imposter, I often convinced myself of being.

For that, I feel lucky, so I trudge onwards.

On Our Past Self

Then there is a song that gave a strange tingly sensation. I smile, like remembering an old joke from a friend.

While this is the year that I worked the most hours, it’s also the year where I was invited to the most weddings. In addition, it was the year where the number of children in my friend circle increased significantly. Like… what just happened to us?

Each time I see them, I realized that we were all battling a unique war. I wasn’t the only one facing responsibilities, nor was I the only one squeezing the lemons that life was flinging in my direction. We were all being challenged every day. We are all on the verge of giving up… but to do what though? What’s the alternative?

We can’t go back in time now. We can’t undo what is done. Not unless we all agree to do it together.

This leads me to my favourite song on the album, The Rager:

And your head never hurt so bad

Thinking ’bout the fun you had

What on earth did we do last night?

Why’s there blood on the shower wall?

Who’s that sleeping on the hardwood floor

And what’s the number written on my palm?

Yeah, my keys are somewhere in my pants

But I ain’t trying to get back home

Then she wakes up, and she quietly laughs

“There’s a party tonight if you wanna go”

The lyrics encapsulate the slippery slope that I remembered walking on so well. I missed those days as dark as they may have been. In my mind, they were always illuminated, as if the memories were drenched in glow stick liquid.

Craft, in his somewhat autobiographical album, summed up the youthful naivete and how in our current lives we’re going to be charmed and misdirected by lives that could have been ours. We gotta remember the times as good and have confidence that we’re heading in the right way. We must abandon the feelings that we’ve let our younger, wilder self down. But know, that this — right here, where you are — is where your younger self had wanted to be. And if the young me could travel to the future and see what I get to return home to, he’d trade his spot with mine.

In Gold Calf Moan, the last song of the album, in the last verse, Craft sums it all up.

And everybody’s shoving camels through the eye of a needle

And you’re punching the clock

Yeah when your new squeeze talks both your ears off baby

You’ve got that open-road feeling

This, like everything else, is just a phase and in 10 years, I’ll be looking back and hope I still have that little tingle, like remembering a joke from an old friend. I’ll see how far I’ve gone and how far I have left to go. The funny thing about having success in your 20s and 30s is that you have another 40 to 50 years to mess it up. Hopefully, I’m still building upwards and not tempted to break it all down.

Full Circle Nightmare is a tragedy, but it reminds me that my life is not. And in moments of stress and frustration, I’m thankful for that clarity. That’s why it’s my favourite album this crazy year.

Buy me a beer, it really helps!