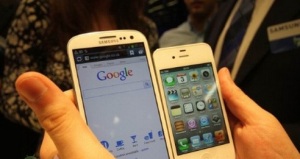 Sooner or later, you’ll have a smartphone

By Elliot Chan, Opinions Editor
Formerly published in The Other Press. July 3, 2014

One in five people currently owns a smartphone on planet Earth. That is quite remarkable, since five years ago I was convinced that I might never get one. I personally didn’t want to be a slave to my phone. But once I felt the sleek design of the iPhone 4 and engaged with the user-friendly interface, I knew that I wasn’t going back. I’m not sure if I’ve gone to the dark side or not, but my life has gotten significantly easier with a smartphone in my life.

Embrace technology. Believe it or not, we’re already slaves to it. We rely on technology for every little thing in our lives, from making a cup of coffee to saving people from traumatic injuries. Technology is the hammer and nails that built our houses, as well as the app that tells us how to get to our friends’ houses. It’s true that hammers can be used maliciously just as the Internet can be, but as long as the number of good uses is greater than the number of bad, we can’t really argue with it.

As mobile devices and wearables get more advanced in our society, it’s important for us to utilize it and learn as much as we can. The sooner we know how to operate it, the better off we’ll be. Technology does not have to be an addiction. Technology can also be a good habit to help you live a better, healthier life.

Have you ever seen a child operate an iPad more proficiently than their parents or grandparents? It’s cute, but that bar is also being raised every day. Soon we’ll be the inept parents and grandparents, unable to update to the next version of iTunes on our Google Glass. We’ll be asking our kids and grandkids to help. While that might seem like the inevitable passing of the torch, I don’t believe our generation will suffer that fate if we continue to progressively learn and use new technology as it comes along.

Sure, it doesn’t make sense for software and Facebook to change every few months for no real immediate purpose, but we shouldn’t judge technological leaps upon their inception. While many designers, engineers, and manufacturers are still working out the kinks for wearables, such as smartwatches and Google Glass, we should be excited for these new innovations—disruptive as they are.

Everyone will have a smartphone one day, because it will become the standard as innovations continue to make strides. If you’ve been resistant to new technology for so long now, you probably won’t be convinced by me, but I’m just saying that the longer you go without it the more handicapped you’ll be should smartphones be imposed on you one day.