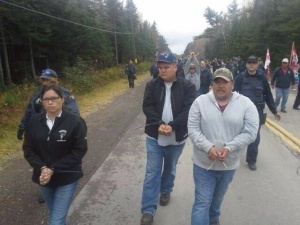 The pros and cons of peaceful protest

Formerly published in The Other Press. Oct. 2013

What began as a peaceful protest near Rexton, New Brunswick on October 17 turned violent as armed RCMP clashed with those opposing shale gas exploration and fracking. Led by the Mi’kmaq First Nations people, the protesters created a blockade and asserted they were “willing to die” for their position. Molotov cocktails and firearms don’t necessarily demonstrate peace or a willingness to negotiate, so when the smoke cleared, guns were holstered, and the roads were emptied, 40 protesters were arrested and five RCMP vehicles were torched.

This was a fine example of a peaceful protest gone wrong, but has a peaceful protest ever gone right? Has dissatisfaction ever been effectively communicated through defiance? Do rebels ever sway public opinion? Personally, I am a supporter of protest: when injustice is clearly displayed, it’s our duty as citizens to stand up and stand together. The history books are full of great examples of effective peaceful protests. Of course the results weren’t immediate, but those who banded together sparked changes and got the rolling wheel of revolution heading in the right direction.

What some consider mischief, others see as heroic. Hell, when put in a high pressure situation, I hope I have the guts to march out in front of a moving tank like the students did in Tiananmen Square during the June Fourth Incident in 1989. I like to think that I have the courage to stand up for my fellow man when the situation calls for it. We all like to believe we can take down Goliath, and we like to cheer for the underdogs, but often we simply bark—what happens when we bite?

More often than not, we consider protest to be a waste of taxpayers’ dollars. Just take a glance at the accomplishments—oops, I mean the consequences—of Occupy Wall Street in 2011. When done right, a protest will trigger debates, dialogue, and meaningful conversations. When done wrong, it becomes a spectacle and a shame on the city, country, and even mankind.

There is a lesson we need to learn from all of this: lessons from Mahatma Gandhi’s hunger strike, Martin Luther King Jr.’s March on Washington, and John Lennon and Yoko Ono’s Bed-Ins for Peace. The strikes, boycotts, and protests garner attention, but all lead to tragic results. They effectively call attention to a problem, thus paving way for a solution, but we must recognize that there might not be such thing as a peaceful protest: all protest hurts in one way or another.

As disruptive as it is, protesting is our human right—or it should be. North Americans are accustomed to their safe little abodes and often only see the devastation of violent protests in other countries. Those people in Egypt and Turkey aren’t uneducated ruffians causing trouble for the establishment. They’re just like us, trying to find comfort and trying to defend something they truly believe in. Those people are “willing to die” for their cause, and to me that is something humanity needs. Protest is an amiable choice and a potentially horrible one—but when push comes to shove, only the cowards are passive.