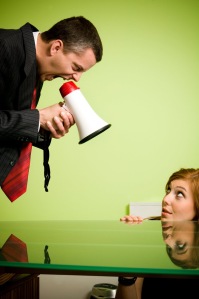 How to be a leader without alienating yourself

Formerly published in The Other Press. October, 2013

Throw a bunch of humans together and see who turns into an animal first.

It doesn’t matter if it’s a workplace environment, a table of friends, or a packed car on a road trip—there will always be a project manager, a storyteller at the dinner table, and a driver in the car. Although the leadership role is sometimes appointed, most often it’s just imposed upon the individual, and from there they have to control the manic, power-hungry beast inside.

We’ve all been or interacted with a control freak. Sometimes their behaviours are so subtle that we don’t even notice them manipulating us; other times they’re aggressive, confrontational, and abusive.

A famous study by psychology professor Philip Zimbardo showed that when given power, anybody can behave in a cruel and unusual manner. The 1971 Stanford Prison experiment was intended to simulate two weeks in prison. Twenty-four students volunteered to participate, with 12 appointed as guards and 12 as inmates. The experiment was halted after six days, when prisoners began to passively accept abuse and harassment from the guards.

Deny it all you want, but there’s a monster inside of you. Although it might not erupt in the same capacity as the prison guards, it can still roar unintentionally at your peers, colleagues, and friends.

Perfectionists and control freaks may not see themselves as the villains. They might feel like the only one who cares, and that they’re merely trying to get the job done in the most efficient manner. In doing so, they create separation—an alienating aura, a souring reputation.

If you ever find yourself resisting compromise or unable to delegate work, you must step back for a moment and recognize the control freak brewing inside you. Only then can you properly assess the situation and your relationship with the group, and have the demon exorcised.

To eradicate the “my way or the highway” attitude, you must be willing to listen. Stay silent for a moment and hear what others have to say. The voice inside your head will try to jump in, but don’t let it. Allow the others to finish and then give your point of view. This way, it becomes a discussion and not a lecture. Control freaks feel these types of interactions slow the working process, but in fact it builds a relationship. By understanding how others think and work, you as a leader can then begin to employ them in the most effective areas.

Don’t interfere with others’ working processes unless they ask for help. The objective might be getting from point-A to point-B, but the journey isn’t up to you. Allow others to work at their own pace, even if they’re slowing the process down. A good leader will communicate and address displeasure, but a good leader will not do the work for them.

The best way to kill the control freak inside is to wing it: whatever you are doing, just wing it and see what happens. Spontaneity is control freak cyanide and a quality leader’s magic potion. Those who can handle improvising and thinking on their feet will be revered by their peers in a way that commanding and demanding leaders can’t be.