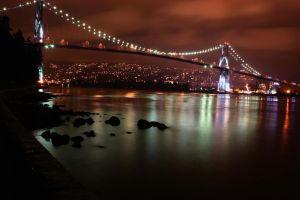 Branching out of Stanley Park, stretching across the Burrard Inlet and linking to the
North Shore, The First Narrows Bridge is arguably the most scenic route commuters
can take in Metro Vancouver.

Construction began in 1937 to accommodate with the city’s growth. But having the
structure in such a prime location caused many concerns. Some thought it would
create an uncontrollable flow of traffic through the park, thus urbanizing the natural
environment. Others were worried about the activities on the water, resulting in
problems on the ports located all along the coast of the inlet. Adapting to the bridge
took some time, but now, it has become more than a simple means of transportation.
The First Narrow Bridge and the view it offers are attractions for all visitors and
those in transit.

As popularity grew, the bridge took on a new name and a new image. The Lions Gate
Bridge refers to the entry point of the Lions, a pair of mountain peaks located in
North Vancouver. The bridge is now a symbol of beauty and pride, a collaboration of
modern day engineering and natural landscape.

Today, over 60,000 vehicles cross The First Narrow Bridge daily. The three lanes
separating traffic are reversible, and during rush hour the middle one swaps in
order to manage the different traffic patterns. On a nice day, bikers and pedestrians
may choose to cross the bridge and enjoy the viewpoints on the decks located at
each support tower.

At night when the chaos of a day is over, the cables suspending the bridge
illuminates and changes colours. The Guinness family donated this decorative
innovation to the city in 1986. Since then, BC Hydro has transitioned to LED lights.
Although the bridge has gone through many changes since its resurrection, few
things have not—it still brightens a city that never ceases to shine.