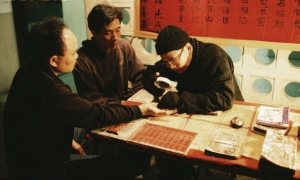 Here’s some strange chinese superstitions that you probably didn’t know about. Superstitions are a common element in every culture, but growing up as a first generation Chinese Canadian, the quirky beliefs of my parents were magnified. As a child I would often be scolded for behaviour deemed taboo. My family would explain their reasoning, but no matter how hard they tried, it always had an undertone of irrationality. Here are some strange lessons I had growing up:

Green Hats: One Christmas I decided to buy an elf costume for a school event. I figured it would be a festive gesture that would bring me a lot of good will. But when I donned the little green toque with a jingling bell at the end, my dad got very upset and we ended up in an argument that still left me puzzled. In Chinese culture for a man to wear a green hat conveys to others that his wife is being unfaithful. But as an eleven year old playing around and dressing up, I didn’t see any harm — plus I didn’t have a wife, so I wasn’t sure why my father got so angry. Either way, I never wore the elf costume again, for more obvious reasons.

Pitching Chopsticks in Rice: I have many bad eating habits, but one that I dare not do anymore is standing my chopsticks in a bowl of rice. The act symbolizes death and a bowl of rice with chopsticks positioned upward is an offering of food for the deceased. I’m not particularly afraid of feeding those in the afterlife; I just don’t pitch my chopstick vertically because as a clumsy eater, I am likely to knock the utensil down and fling rice all over the table; another Chinese no-no.

Shoes, Books and Haircuts: Perhaps the most restraining period of the year is the few weeks before and after Chinese New Years. When I was young my mother would make sure I have everything set before the calendar changed. To avoid all possibility of misfortune, I would get a new pair of shoes and a haircut. The word “shoes” in Cantonese is a homonym for “rough” and haircuts are considered to be the shaving and slicing of good luck and therefore should not be associated with the beginning of a year. Sometimes I wonder why simple coincidences can result in superstitions, for example, the word “book” in Cantonese sounds the same as a the word “lost”, so it is unwise to purchase books during the Lunar New Year. Sadly my teachers don’t share the same superstition, because it would have been a wonderful excuse to avoid those expensive college textbooks. Perhaps it is a curse.

Restless Legs: I was an energetic child growing up. I could barely keep still even when I was sitting. My legs would shake at the dinning room table, at my desk or on the couch, and my mother would always let me know about it. I saw no harm aside from annoying the person sitting next to me. I was aware that it made me look low class, but who was I trying to impress anyways? Of course there was also a superstitious link to this bad habit. My grandmother once explained it to me as a man being a tree and if he shakes all the leaves will fall. Leaves were symbolic for money and luck. Sadly, I always seem to have too much coffee or a catchy song in my head. I guess I’ll be poor forever.

New Home: I moved homes multiple times when I was young and remembered my parents dismissing houses for abstract reasons. I followed along, house to house wondering how Chinese people live in so many different places if they were so picky. “This place is no good, the address has the number four in it,” my mom would say. “It is also facing south,” my father would say. “It is in front of an intersecting road,” they would both say, “and we need to walk down a staircase to the front door.” Superstitions seem crazy, but my parents are happy, healthy people. They say and do a lot of weird things, but hell, it has worked out so far.

I’m not much of a believer, but I would hate to see these irrational beliefs die out in the next generation. Yet I hate the idea of passing along superstitions like diseases. Sometimes, I’d sit back, shaking my legs, and wonder what I would say to my kids if they decided to wear green hats.