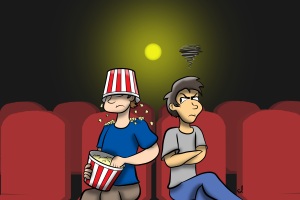 The wonderful world of entertainment has created a fictional place we can all live in. Sadly though, the matrix of our lives takes place not with Neo, but in the real world.

It might seem contradictory arguing against movie and television references by using one myself, but I just wanted to give an example of their effectiveness—or lack thereof. A big mistake is assuming everybody has the same taste and entertainment memory as you do. Since Seinfeld ended and The Simpsons did whatever it did, there hasn’t been a television show I could reference to get my exact point across. I try to stay well versed, watching a little of this and a little of that so I can hold my own in conversations, but few others do. Most are committed to a couple of television shows and a limited number of movies. Oftentimes, I use a quote and end up explaining the concept of the scene, the characters, and even the whole program itself.

But worse than having to explain a reference is having to listen to someone else explain one. “Have you seen the episode of the Big Bang Theory where…?” And I stare at them, my eyes glazed over as they try to paint the picture of Leonard doing something that resembles the situation we’re currently in. It’s unsettling watching a crowd happily discuss a television show you have no interest in or haven’t caught up on. You simply stand at the perimeter, lacking interest or fearful that your show will be ruined.

Similar to telling someone about your dream, referencing a movie the other person hasn’t seen isn’t even worth talking about. Sure, it can be a nice detour from the normal small talk of weather, traffic, and work, but like most detours, it’s only used when something is already broken: the conversation.

Getting a cheap laugh by referencing a Family Guy or South Park episode seems like fun, but the truth is it shows people your limited creativity. There are people at parties who are the centre of attention merely for memorizing Peter Griffin quotes, but nobody really cares about those people or finds them interesting.

If you want to reference something, make sure the person you are speaking to knows about it beforehand. If they don’t, don’t bother explaining it, because the magic is already lost. There is plenty to talk about, so don’t go on and on trying to describe the blonde guy from Clerks. You know… urgh… what’s his name? You know, you’ve seen it right? Let’s move on.