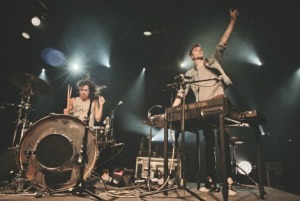 It is hard to imagine high energy on the Sunday night of Halloween weekend. But Matt and Kim supplied the perfect double-shot-espresso kick to end the late October rituals. Packing into Vancouver’s Commodore Ballroom with the fanatic opening performance by Oberhofer, Matt and Kim made a custodian’s nightmare out of the dance floor. Confetti, balloons, and derelict garments scatter across the venue as the crowds bounce to the pair’s ecstatic beat.

Gratefully sipping the 5% Budweiser from north of the border, Matt and Kim mixed their classic tunes with popular dance hits including Sir Mixalot, Alice Deejay, and Yolanda Be Cool & DCUP to name a few. Surpassing any nightclub experience, watching Kim laying the fury on the cymbals with her permanent smile was worth the ticket price. The pair used the stage like a jungle gym, striking poses on the bass drum, stool and even climbing upon the audience. Aside from being agile, the most memorable moments include Kim’s proposition. After hearing a collective chant from the crowd, she said she would remove her bra if the audience would take off an article of clothing and wave it in the air. Adhering to her words, Kim continued to drum away mildly exposed in her white-netted tank top.

There was no denying that Matt and Kim’s performance was both audibly and visually pleasing. Multiple cameras were attached to their microphones and the image was projected on a screen behind. Occasionally they would cut to the camera’s perspective showing the audience what the performance would look like if it was presented through Skype. But this was no small screen performance. It was a spectacle. Few musical duos could sustain the vigorous energy like Matt and Kim. They weren’t only hosting the party; they were the life of it.

After ending on a high note with “Good For Great,” an optimistic centrepiece on their third album Sidewalks, the couple guaranteed the crowd that their love for Vancouver would bring them back sooner than later. The reassured audience members finally catch their breath and wipe the sweat off their brows. It was indeed a workout of a concert. Feeling fit and undaunted, the costumed crowd steps out into the rainy night recollecting a successful weekend.