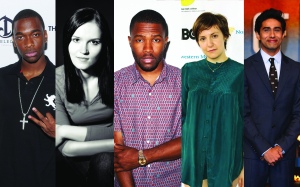 I brace myself for the unfamiliar. New does not always mean good, especially in the arts. Plenty of young actors, musicians, and writers fall between the cracks of entertainment and are forgotten. These are not the gutter artists; this is the list of 2012’s finest prospects.

Perhaps the last good reason to watch Saturday Night Live, Jay Pharoah, the youngest member of the late night television cast, has been doing stand-up comedy since he was 15. Now at the age of 25, he is best known for his perfected impressions of Will Smith, Jay-Z, Eddie Murphy, and Denzel Washington. But the one that got him the most recognition last year was his impression of Barack Obama. Pharoah’s imitations alone were a good enough reason to not vote for Romney—there will be four more years of Obama, but many more of Pharoah.

For an author, nothing garners stardom like writing for young adults. Following in the tracks of Harry Potter, Twilight, and The Hunger Games, 24-year-old Veronica Roth has found her market with the Divergent trilogy. Divergent and its sequelInsurgent are both on the New York Times Best Seller list, and in 2011 she won the Goodreads Choice Award. But most importantly, in April 2012, she sold the movie rights to her first novel. With the third part of the trilogy preparing to hit stores in the fall, Roth is the next rock star of fiction.

Christopher Frances Ocean, better known as Frank Ocean, had been in the shadows of Kanye West, Jay-Z, and even Justin Beiber for many years. But those days are over, and the spotlights are on him now after his debut studio album Channel Orange. He combines classical R&B, 8-bit funk, and electronic with inventive lyrics. When Ocean’s personal life caused controversy after he announced on Tumblr that he had fallen in love with a member of the same sex, Ocean was able to find more support than backlash. Times are changing, and Frank Ocean is considered an inspiration for those coping with fears of acceptance.

Finally I can say, “I’m watching Girls,” without sounding as creepy as I am. Lena Dunham is the creator, lead writer, and star of the best comedy on television. HBO’sGirls was nominated for four Emmy’s and won two Golden Globes in 2012. With Judd Apatow as her ally, failure is impossible. For Dunham, the future could not look brighter. With the second season of Girls premiering earlier this month and signing a $3.5 million book deal with Random House, what can’t this 26-year-old do?

It is easy to be overlooked when you share a screen with a Bengal tiger, but Suraj Sharma’s performance did not waver for a second. In Ang Lee’s adaptation of one of this generation’s most influential books, Sharma proves that he is another young Indian acting pioneer in America. But there is undeniably something special about this kid. Whether he ends up being a permanent fixture in Hollywood or a one-hit wonder, 2012 was the year of Pi.

Thanks for joining us for our best of the best lists of 2012. If you missed any of The Other Press’ top picks, head over to http://theotherpress.ca to see our top five movies, albums, and video games of last year!